My husband’s grandmother, Joanna “Jean” (née Drajem) Barth was the family historian for her generation, and I loved her for it.  I loved her for other reasons, too, of course, but listening to her stories about Buffalo’s East Side in her childhood and youth gave me such a vivid impression of Buffalo’s pious, hard-working Polish immigrants who brought with them their language, culture, faith, and traditions and created a microcosm of Poland in their new homeland.  Grandma Barth was my Grandma-in-law for seventeen years before she passed away in 2008 at the age of 92, but she was mentally sharp as a tack until she died and an incredible font of family knowledge.  She could tell me names, birth, marriage and death dates from memory for the entire extended family for several generations, with stories about each person, all in her East-Side Polish accent that was somehow comforting to hear.

Grandma Barth’s stories laid the foundation for my research into my mother-in-law’s family.  In the spring of 1999, she traveled from Buffalo to our home in Illinois for our third son’s christening.  I remember spending as much time as possible during that visit, cradling my baby in one arm while typing with my free hand, inputting all the family data from Grandma’s memory into Family Tree Maker.  A few years later, she was back for another christening, this time for my daughter, in 2003.  And this time, she brought with her a plastic shoebox that I came to refer to as, “Grandma Barth’s Box of Genealogical Treasures.”

This plastic box contained newspaper clippings, funeral home prayer cards (my family always called them “obrazki,” which means, “pictures” in Polish), and assorted scraps of paper on which Grandma had jotted down bits and pieces of family history.  Never one to waste paper, most of these notes were written in Grandma’s neat, careful penmanship on the backs of junk-mail coupons for pizza and car washes.  What she preserved was amazing.  There were obrazki in there from the 1930s  through the early 2000s. Her parents’ marriage certificate was there, along with other vital records.  There were newspaper articles about her home parish, Corpus Christi, a collection of articles about Fr. Justin Figas (founder of the Father Justin Rosary Hour, a Polish-language radio program) and a series of “Anniversary Books” from Corpus Christi, arranged according to month. Each monthly book covers the years 1898 through 1997, and lists the names of all those who died in the parish during that month in each year.

I tried to photocopy as much of it as I could during her visit, but I recognized that care needed to be taken with this project.  Some of these newspaper death notices had been trimmed into tiny, yellowed bits of paper not more than two inches square.  Moreover, there was clearly an organizational system in place that must be respected. Grandma paper-clipped the scraps of paper together in batches, and put these individual batches into plastic storage bags according to the branch of the family tree to which they belonged. Grandma admitted that in some cases, she didn’t know exactly how some of these people fit into the family, she only knew that they were cousins, which made it all the more important to maintain the associations between the documents which she created through her organizational scheme.

As much as I wanted to photocopy all of it, there was only so much that I could do, given that I had a houseful of out-of-town guests visiting for my fourth child’s christening and only a few days’ time.  Grandma told me there was no rush — she wanted me to have the box when she passed away.  In the meantime, though, she wanted to share it with a cousin.  I thanked Grandma wholeheartedly, congratulated myself on getting as much scanned as I did, and went back to raising my family and researching my family tree.

After Grandma passed away in 2008, we discovered that the box was missing.  The cousin who was supposed to have it didn’t remember anything about it.  My mother-in-law asked around the family, but no one seemed to know what happened to it.  It was presumed to have been thrown out with the trash.  It was an inestimable loss — I was sick at heart over the thought of so much family history, Grandma’s legacy, rotting in a landfill somewhere.

But as you can tell from the photo at the top, the story has a happy ending, and my worst fears never materialized.  One day last spring, my Mom-in-law got a phone call from this cousin, saying he’d found a box of her mother’s things, and he’d like to return it to her.  She called me immediately, and said, “I have some good news for you!  Are you sitting down?  My cousin found the box!”  So this past weekend, several of us got together for breakfast, including Mom, her cousin, Grandma’s youngest sister, and me, and the box found its way back to me at last, looking exactly as I’d remembered it.  Mom’s cousin also kindly shared with me some additional family history treasures from his personal collection.  The poor man was so apologetic — Grandma never mentioned to him about her intentions for the box, and he had no idea what kind of treasure trove he was sitting on.  I’m sure that my discoveries based on the contents of this box will fill quite a number of future blog posts, but it’s going to take some time to process and analyze all of this.  In the meantime, a picture is worth a thousand words, so here are a few of the “goodies” from the box.

Figure 2:  Notes from Grandma’s notebook regarding the family history on her mother’s side (Kantowski and Kończal). 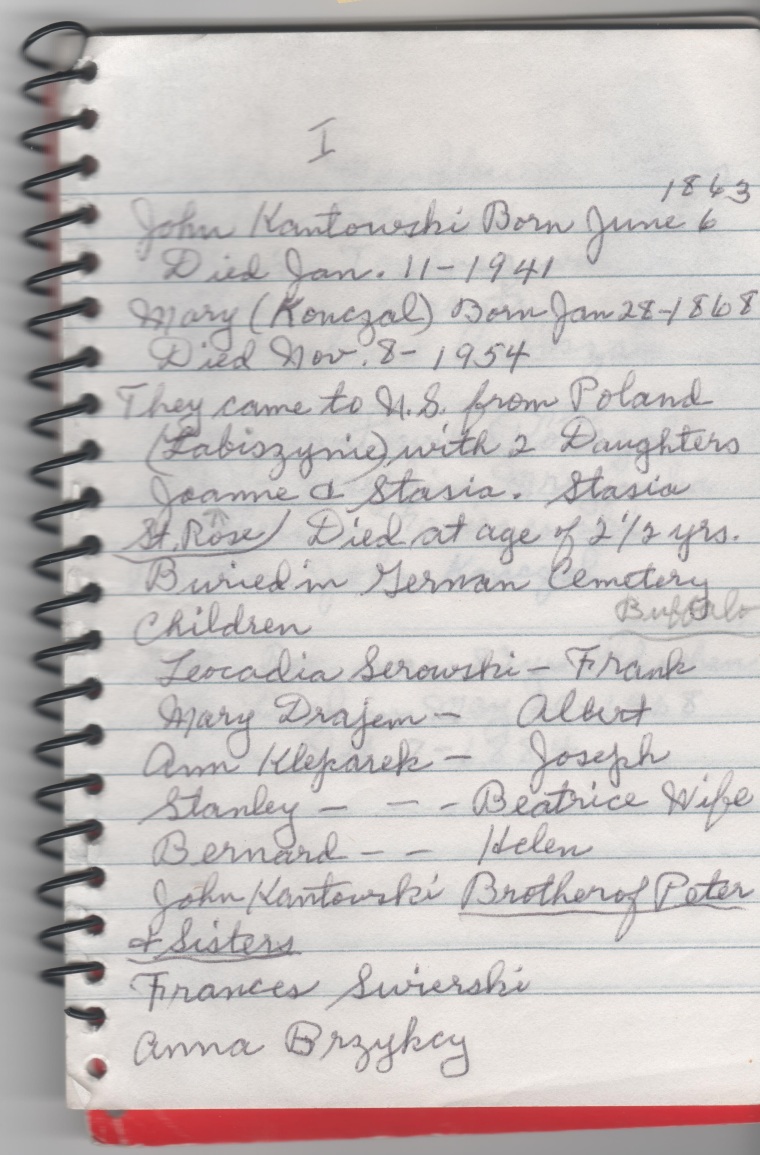 So you can see why I’m pretty excited!  So far I’ve scanned 27 “batches” of clippings, and there’s still more to go.  Here’s to you, Grandma Barth, with love and gratitude for all your love and diligence in preserving the family history for future generations to enjoy.