One of the guiding principles of efficiency in genealogy research is to create a research plan and stick to it. We all run across distractions as we research, of course, and we’ve probably all had that experience of heading down a research “rabbit hole” in pursuit of something not directly related to the original goal, and then emerging hours later with little to show for one’s research time, beyond, say, a new appreciation for plants which our ancestors might have used to make clothing dyes.  (Okay, maybe that’s just me.  Anyway.)  In the genealogy community, these distractions are commonly referred to as BSO’s: Bright, Shiny Objects.  The prescribed remedy is to make a note of each BSO as it arises, jotting down where it was found so that it can be explored in detail during another research session, and then move on, in order to achieve the research goals set forth in the initial research plan. This is absolutely sound advice.

And yet, there are times when I am so very glad that I pursued those BSO’s.

A perfect example of this arose last weekend.  My husband and I had a date night planned, but I had allotted some research time in the afternoon prior to that.  My goal was to make a list of distant cousins on my Dad’s paternal line who might be persuaded to donate a DNA sample to address some research questions that have recently cropped up. In reviewing my data on this side of the family, I took a look at my Grentzinger line.

The Grentzingers of Steinsoultz, Alsace and Detroit

Henry and Catherine (née Grentzinger) Wagner of Detroit, Michigan, were my 3x-great-grandparents.  Henry was the son of Johann Heinrich Wagner and Maria Anna Nau, immigrants from Germany who arrived with their family in Detroit in 1853.1 Catherine was the daughter of Peter and Elizabeth (née Eckhardt/Eckerd/Eckert) Grentzinger of Steinsoultz in Ober-Elsaß, or what is now the Haut-Rhin department of France.  It’s not yet clear to me whether Peter also emigrated, or if Elizabeth came to Detroit with her children as a widow, but Elizabeth herself is buried in Assumption Grotto Cemetery in Detroit.2  It is also known that Catherine had at least one sibling who emigrated:  a brother Peter, who was living with Catherine and Henry Wagner’s family in 1870 (Figure 1).3

Note that the family includes not only Henry and Catherine and their two children, John and Mary, but also 16-year-old Mary Meat.  I haven’t yet figured out how she fits in, so that’s another mystery for another day.

In reviewing my notes, I realized that I still didn’t have Henry and Catherine’s marriage record.  Henry and Catherine Wagner should have married circa 1855, based on the fact that their older son, John, was born circa 1857.  Catherine was born in 1828, meaning she would have been 27 at the time of her first marriage.  That’s certainly a reasonable age for a first marriage.  But in a previous round of research, I’d noted the following marriage record in the index at FamilySearch (Figure 2) 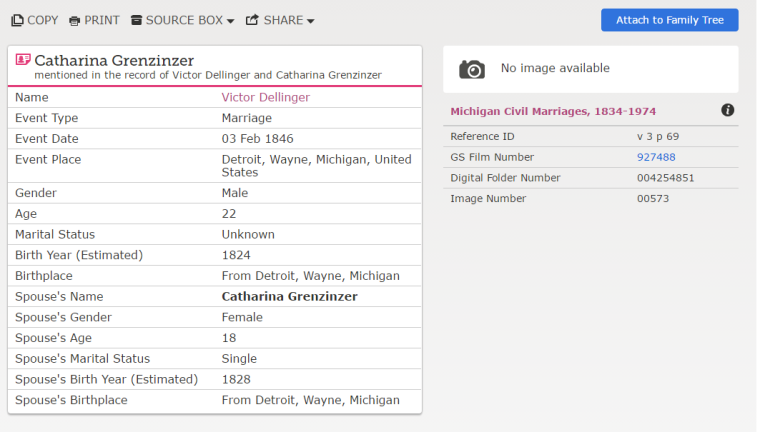 I’d wondered if it was my Catherine, but there were other Granzinger/Grentzingers living in the midwest at that time and the relationships between them aren’t yet clear to me. I know from experience how easy it is to draw erroneous conclusions based on limited data, so I was hesitant to get too excited about this record.  Although Catherine’s age here suggests a birth year of 1828, which is consistent with what is known for “my” Catherine, this indexed entry did not include parents’ name or any other identifying information that might make it easier to draw firm conclusions. So I put this puzzle piece aside for the time being and moved on.

When I rediscovered this puzzle piece last weekend, it occurred to me that many of the indexed records collections on FamilySearch now have images online.  A great place to see what’s online (indexes and scans) is to visit the “Research by Location” page for your area of interest.  For example, the page for Michigan  shows all these fantastic collections of online images (Figure 3).

I noticed that the Michigan County Marriages, 1820-1940 database has been updated since the last time I researched my Grentzingers two years ago.  I looked up that marriage record for Catherine Grentzinger and Victor Dellinger again, and this time, I was able to obtain the image of the record (Figure 4),4 despite the fact that Figure 2 states “no image available” in the upper right corner. Sometimes it seems that the left hand at Family Search knows not what the right hand is doing. 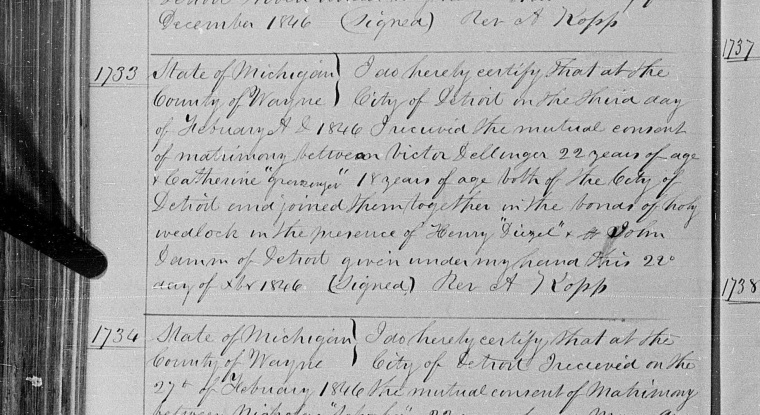 The full record reads, “1733.  State of Michigan, County of Wayne. I do hereby certify that at the City of Detroit on the third day of February A.D. 1846 I received the mutual consent of matrimony between Victor Dellinger, 22 years of age, + Catherine “Grenzinger,”18 years of age, both of the City of Detroit, and joined them together in the bonds of holy wedlock in the presence of Henry “Diegel” [Diezel?] and + John Damm of Detroit, given under my hand this 22nd day of Xbr 1846 (signed) Rev. A. Kopp.”

Unlike that index-only record, this image was a cause for celebration, because it provided a necessary clue that allowed me to conclude that this was, indeed, my 3x-great-grandmother.  The clue was the first witness, Henry Diegel.  When I saw that name, my heart leaped with joy.

Now at this point, you may be asking, just who is Henry Diegel?

As I mentioned earlier, Catherine’s mother, Elizabeth (née Eckerd) Grentzinger, is buried in Assumption Grotto Cemetery in Detroit.  The last time I was working on this line, I’d made a phone call to the cemetery office to see what they could tell me about Elizabeth’s burial. The receptionist was very informative.  She told me that the burial record is in Latin and in translation it reads,”1 August 1854 Elizabeth Eghart (sic) age 54. Henry Diegel.” She commented further that Henry Diegel was probably the one who paid for the grave, and was presumably Elizabeth’s husband, based on the way the records are structured.5

Immediately I took a look at the other burials in Find a Grave in Assumption Grotto Cemetery with the surname Diegel to see if I could gather additional clues.  There were a couple hits for men who were born in the mid-to-late 1800s, who were therefore unlikely to have been Elizabeth’s husband.  When I broadened the search to include any Diegels buried in that cemetery, however, there was quite a list of them, including one John Henry Diegel, born in 1798, who seemed like the most plausible candidate for a connection to Elizabeth Grentzinger. But why was she not buried as Elizabeth Diegel, if they were married?  Perhaps one of the other Henry Diegels was a son-in-law who paid for her grave, since her husband Peter Grentzinger was already deceased?  There were too many questions and too few answers, and more pressing matters pulled me away from further research on this line.

Until last weekend.  Last weekend, it became clear that Henry Diegel was connected to the Grentzinger family in some important way, even if that connection is still unclear.  Not only did he pay for Elizabeth’s grave, but he also witnessed the marriage of Elizabeth’s daughter, Catherine. More importantly, I now had clear evidence that Catherine Wagner was married prior to her marriage to Henry.  Armed with that information, it was a matter of minutes before I located her civil marriage record to Henry Wagner in 1855 (Figure 5).6

The witnesses named here are Henry’s siblings, August and Gertrude Wagner, providing further confirmation that this is the correct marriage record for my ancestors.  It’s also worth mentioning that although this is the civil marriage record — meaning the one created by the civil authorities for Wayne County, Michigan — this does not imply that they were not also married in a religious ceremony.  In fact, the column heading on the last column (cut off in this image) indicates the name of the officiant at each marriage in the register, and the column heading states, “Ministers of St. Mary’s Church.”  The church record should also be sought because it is likely to contain information beyond what is mentioned on the civil version of the record.

After realizing that Catherine Grentzinger was married to Victor Dellinger in 1846, my next step was to look for them in the 1850 census (Figure 6).7  Bingo!

They were indexed under Victor Dalmgher, and it doesn’t look like a transcription error, but rather a spelling that’s true to what was recorded in the census.  At this point I don’t know which version is closer to Victor’s true surname, but as my undergraduate research mentor used to tell me, “Keep gathering data, and truth will emerge.”  What’s really exciting about this record is the fact that there are two children living with the parents, previously unknown to me. Also listed with this household, but appearing at the top of the next page, is Catherine’s brother, Peter, recorded here as “Gransan” (Figure 7).

That was as far as I got with my pursuit of the BSO that afternoon before my husband came looking for me, wondering why I wasn’t dressed and ready for our date yet.  (Have I mentioned that he’s a saint?)  While it’s true that my journey down the rabbit hole kept me from finishing the task I’d assigned for myself, I was still able to complete that research task the next day.  And I’m absolutely thrilled with the fascinating new insights into my Grentzinger ancestors that resulted from one little dalliance with a BSO.

4 thoughts on “The Siren Song of the BSO”