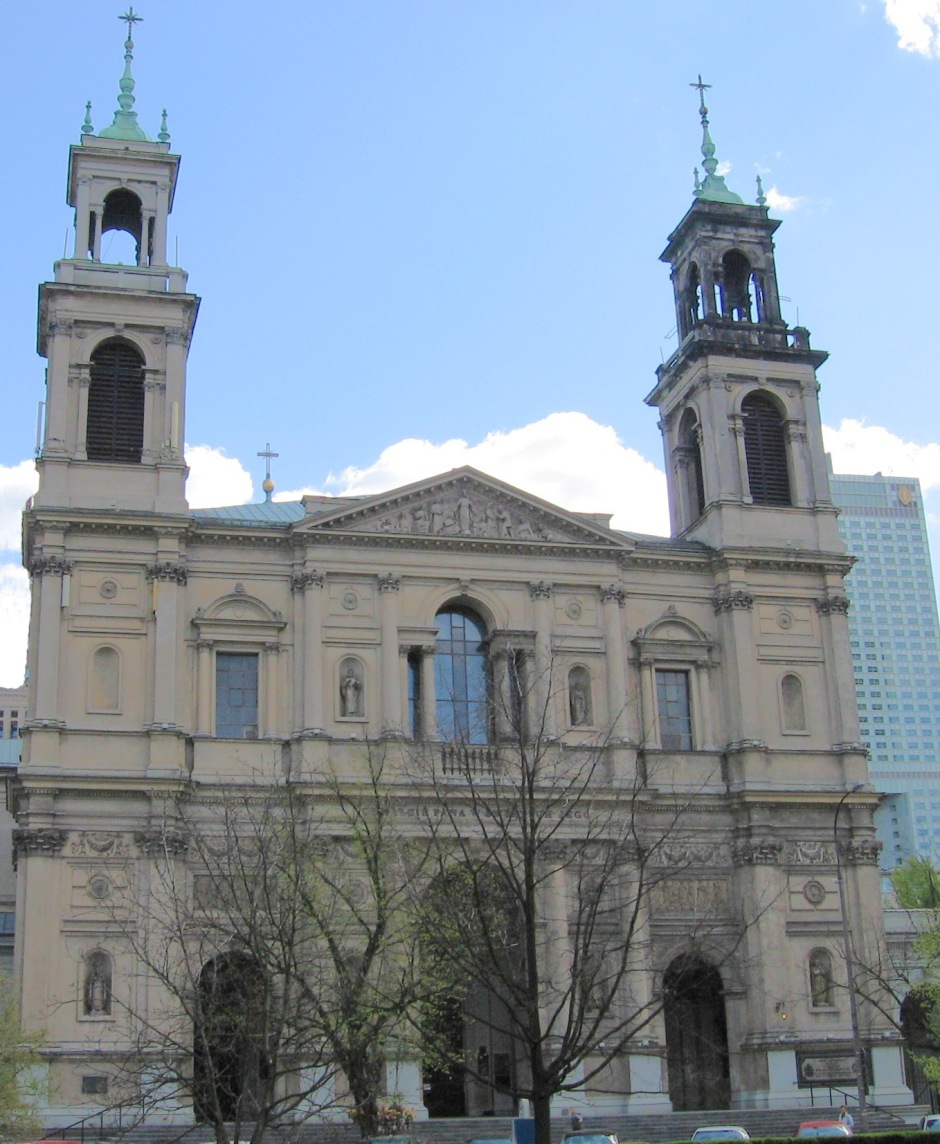 Genealogists are often too familiar with the frustration of painstakingly gathering documentation to identify an ancestral village, only to discover that the family didn’t stay there for long, nor did they leave any hint about where they went. Sometimes, it’s just a branch or two that disappears from the records, but in such cases, it can be really difficult to find people in the absence of indexed records. I have quite a few family lines that dead-end this way, but the good news is that indexing efforts in Poland are bringing more and more of these missing relatives to light. Just yesterday, in fact, I managed to discover evidence for a previously unknown Zarzycki cousin who went to Warsaw.

I’ve written about my Zarzycki/Zażycki family in the past. This is the family of my great-grandfather, Jan Zażycki, who was born in the village of Bronisławy in Sochaczew County in 1866, and immigrated to Buffalo, New York. The village of Bronisławy belongs to the parish of Rybno, and it’s challenging to obtain records from this parish since so few of the parish books were ever transferred to the state or diocesan archive. Most of them are still onsite at the parish itself, but thanks to the diligence of my onsite researcher, Justyna Krogulska, and the generous pastor who was willing to permit access to the records, I’ve been able to gather baptismal records for Jan and his siblings, trace the family’s roots a bit further back, and also trace some of Jan’s siblings forward, to identify their spouses and at least some of their children. However, some of Jan’s siblings disappeared from the records in Rybno. Did they die in infancy, and their deaths were somehow not recorded? Did they move and perhaps marry elsewhere in Poland? So far I haven’t found evidence of emigration (I’ve looked), but maybe a surname was dramatically altered?

Today, one of those missing siblings emerged, in the indexed records for Warsaw in the vital records database, Geneteka. Leonard Zarzycki was the youngest brother of my great-grandfather Jan. Leonard was born 6 November 1876,1 and his marriage to Marianna Majewska was recorded in Rybno parish on 14 February 1904.2 After that marriage, however, the couple disappeared from the records. No birth records for their children were discovered in Rybno, and I had no idea where they went until today, when I discovered the following marriage record for Leonard and Marianna’s son, Zygmunt, at All Saints Church in Warsaw in 1929.3 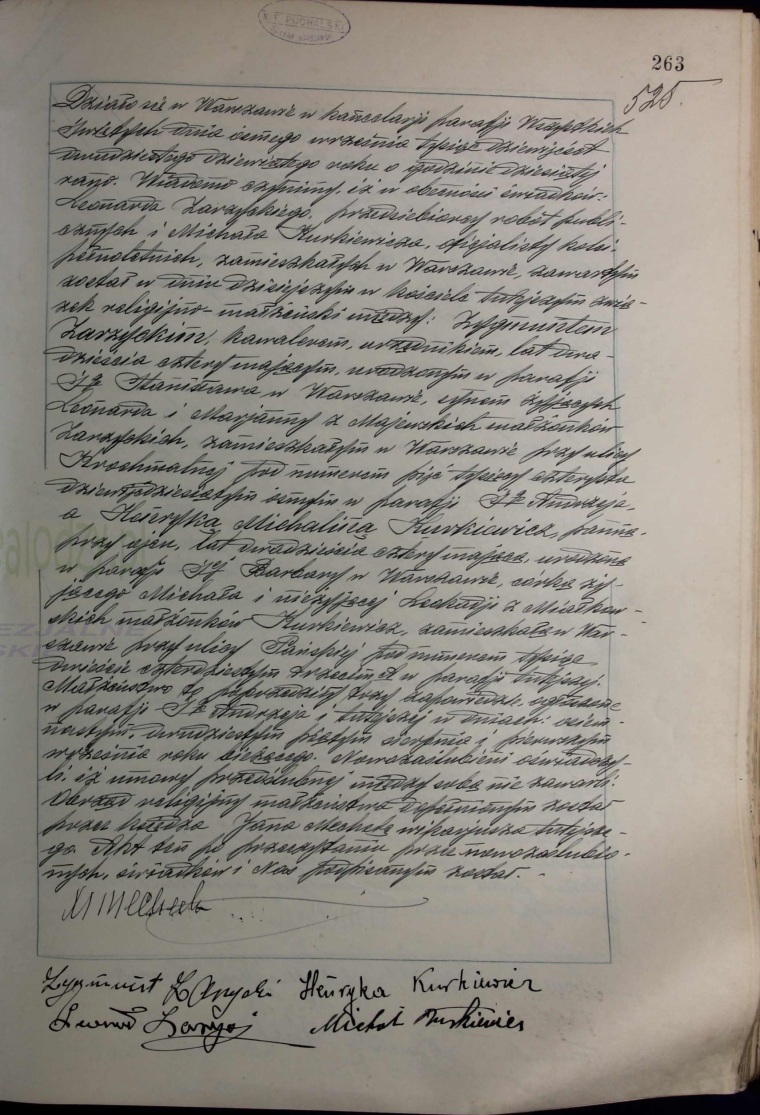 The translation of the record is as follows:

“#525. This happened in Warsaw in the office of All Saints parish on the eighth day of September in the year one thousand nine hundred twenty-nine at ten o’clock in the morning. We declare that — in the presence of witnesses, Leonard Zarzycki, public works entrepreneur, and Michał Kurkiewicz, railroad official, adult residents of Warsaw — that on this day, in this church, was contracted a religous marriage between Zygmunt Zarzycki, bachelor, office worker, having twenty-four years of age, born in the parish of St. Stanisław, son of the living Leonard and Marianna née Majewska, the spouses Zarzycki, residing in Warsaw on Krochmalna Street in house number five thousand four hundred ninety eight in St. Andrew’s parish, and Henryka Michalina Kurkiewicz, single, [residing] with her father, having twenty-four years of age, born in the parish of St. Barbara in Warsaw, daughter of the living Michał and the late Leokadia née Miałkowska, residing in Warsaw on Pańska Street in house number one thousand two hundred forty-three in the parish here. The marriage was preceded by three announcements, proclaimed in the parish of St. Andrew’s and here, on the eighteenth and twenty-fifth days of August and the first day of September. The newlyweds stated that they had no prenuptial agreement between them. The religious ceremony of marriage was performed by Fr. Jan Mecheta, local vicar. This document was read aloud to the newlyweds and witnesses, and we signed. [Signed] Fr. Mecheta, Zygmunt Zarzycki, Henryka Kurkiewicz, Michał Kurkiewicz.”

The ages reported here suggest that both Zygmunt and his bride, Henryka, were born circa 1905 in Warsaw. The parish in which Zygmunt was baptized, St. Stanisław, Bishop and Martyr, was founded in 1611 in the Wola district of Warsaw, and Zygmunt’s birth record was subsequently located in the records from that parish. The address at which Leonard Zarzycki’s family was living at the time of Zygmunt’s marriage, 5498 Krochmalna Street, appears not to correspond to any present address there, but this is hardly surprising, given that 90% of Warsaw was destroyed during World War II. Krochmalna Street itself was a very poor neighborhood, largely Jewish, and the eastern part of the street was within the area walled off by the Nazis in November 1940 to form the Warsaw Ghetto, just 11 years after the date of Zygmunt and Henryka’s wedding.

I have to wonder what happened to the Zarzyckis during the war. Did they leave the city and go back to family in Bronisławy? Were they forcibly relocated? Might they have participated in the Warsaw Uprising? One resource to check for answers to these questions is the “Loss” database. In 2006, The Polish Instytut Pamięci Narodowej (Institute of National Memory) and the Ministerstwo Kultury i Dziedzictwa Narodowego (Ministry of Culture and National Heritage) developed this database to assist families in discovering the fates of individuals who suffered the loss of life or property as a result of Nazi oppression. A broad search for Zarzycki/Zarzycka, with father’s name Leonard (to locate Zygmunt) or Ignacy (to locate Zygmunt’s father, Leonard) did not produce any likely matches, suggesting that the family might, indeed, have left Warsaw before the war.

Another broad search in the indexed records at Geneteka for St. Stanisław Church in Warszawa-Wola reveals a large number of births to Zarzyckis between 1904, when Leonard and Marianna were married, and 1908, when indexed records end for this parish. I hoped that some of these might be for additional children of this couple, so I examined each record individually, since the index is of the “bare bones” variety which lacks key identifying information such as mother’s maiden name. Unfortunately, none were for children of Leonard and Marianna. Zygmunt’s marriage record stated that the family was living in Warsaw in St. Andrew’s parish at that time, so perhaps they moved there soon after he was born, and additional siblings can be found in those records. Birth records for St. Andrew’s are not indexed in Geneteka for the period from 1904-1912, but they’re available (unindexed) at Geneteka‘s sister site, Metryki. So perhaps I’ll be able to discover a few more children of Leonard and Marianna Zarzycki in due time. Stay tuned!