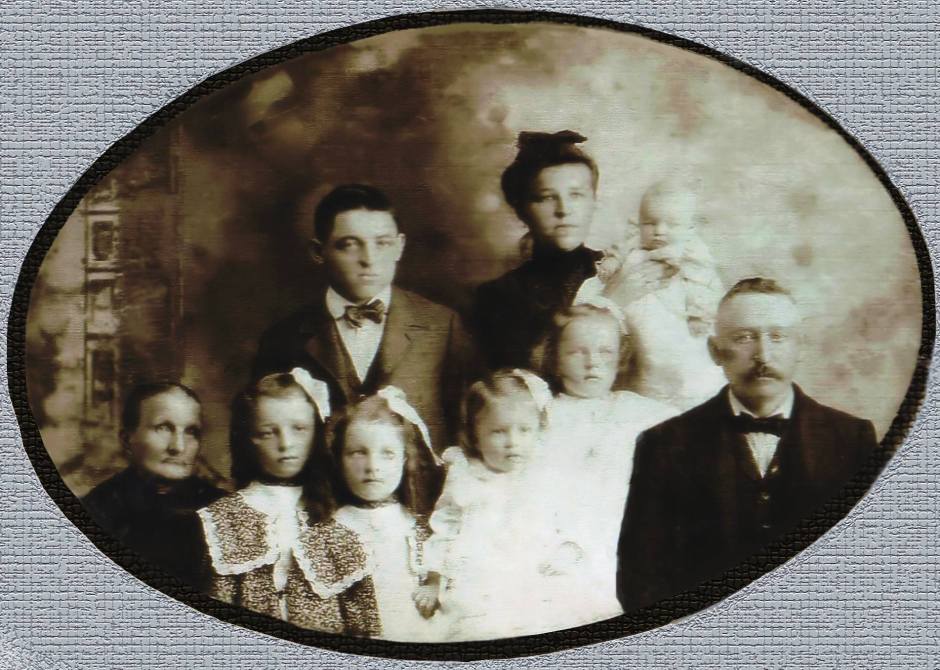 Recently, I wrote about my first attempt at translating a German marriage record for my great-great-great-grandparents, Johann Meier and Anna Maria Urban. I was getting a little ahead of myself there, since I never really explained my connection to that couple, so I’d like to take this opportunity to remedy that.

Anna (née Meier) Boehringer (or “Nana,” as she was known by her grandchildren and great-grandchildren) was my father’s maternal grandmother, and one of the three great-grandparents whom I distinctly remember from my childhood. All three of them — Nana; her husband, “Grandpa John” Boehringer; and “Big Grandpa” (Joseph Zielinski) appear in this photograph from a family party in 1969. Although I was too young to remember this particular moment, but I love this photo nonetheless because they’re all in it.

Anna Julia Meier was born 25 April 1895 in Buffalo, New York; the oldest of the 13 children of Wenzeslaus (“Wenzel”) and Anna (née Goetz or Götz) Meier. I’m incredibly fortunate to have a three-generation portrait of Anna with her parents, grandparents, and some of her siblings, taken circa 1903. This version of the photo was retouched by Leslie Utley of the Genealogists Photo Restoration group on Facebook to remove some scratches and flaws. In the front row, left to right, there is my great-great-great-grandmother, Julianna (née Bäumler) Götz (1838-1905). Next to her are her grandchildren, Anna Meier, Julia Meier, Marie Meier, and Frances Meier, followed by my 3x-great-grandfather, Carl Götz (1853-1933). In the back row are Wenzeslaus Meier (1871-1942) and Anna (née Götz) Meier (1877-1949), holding baby Margaret Meier.

One of my most cherished family heirlooms is Nana’s First Communion prayer book, written in German, with her name inscribed in it.

Here’s one more great photo of Nana, at the age of 17 in 1912, retouched to remove creases and colorized by Lisa Binion of the Genealogists Photo Restoration group on Facebook. I love the confidence on her face here, and the hint of a smile around the corners of her mouth.

As mentioned, Anna’s father was Wenzel Meier, a German immigrant born in Bavaria. Wenzel is on the left in this photo taken circa 1939, presumably at his home in Buffalo, New York.

According to the Social Security Applications and Claims Index, 1936-2007, he was born 27 March 1871 in Roding, Federal Republic of Germany.1 He came to the U.S. in 1890, on board the S.S. Fulda, which departed from Bremen and Southhampton and arrived in the port of New York on 8 August.2 The passenger manifest states that his last residence was “Obertrubenbach” (Figures 1a and b).

Figure 1a: Extract from passenger manifest for Wenzeslaus Meier, S.S. Fulda, 8 August 1890, far left side of the page.2

Figure 1b: Extract from passenger manifest for Wenzeslaus Meier, S.S. Fulda, 8 August 1890, far right side of the page.2

These two pieces of information, Roding and Obertrubenbach, were consistent with the location of Obertrübenbach, which is a village in Cham county, Regierungsbezirk Oberpfalz, in the easternmost part of Bavaria, roughly 20 miles from the present-day border between Germany and the Czech Republic, as shown on the map. (A Regierungsbezirk is an administrative division that’s intermediate between a county and a state.) Obertrübenbach has had a Catholic church, Sts. Peter and Paul, since the second half of the 12th century, but this church has been a filial church of the church in Roding since at least 1391.3 Although the entry for Obertrübenbach in the Meyers Orts- und Verkehrs-Lexikon des Deutschen Reichs (Meyers Gazetteer of the German Empire) does not specify the relationship between the churches, only mentioning that a Catholic church did exist in Obertrübenbach, the online version of the gazetteer confirms that the village belonged to the parish in Roding (claiming FamilySearch as the source for this information). The church of St. Pancras in Roding is indeed where Wenzel Meier was baptized in 1871, and his baptismal record is shown here (Figure 2).4 The priest who recorded Wenzel’s baptism really loved abbreviations, so a complete transcription and translation of this record was a joint effort by several contributors in the Genealogy Translations group on Facebook, including William F. Hoffman, Mente Pongratz, Gerardo Cacciari, and Jadwiga Berntsson.

In translation, the record states, “On the 27th day of March at 1:00 at night was born, and on the same day at 9:00 in the morning by C. Piendl was baptized Wenzeslaus, legitimate son of Johann Maier, homeowner in Obertruebenbach [house] number 5, and his wife Maria, whose father is Matthias Urban, homeowner in Kalsing. The godfather was Joseph Urban, son of a homeowner, living in Atzenzell, and acting in his place [as proxy godfather] was Mathaeus Pongratz. The midwife was (Crescentia?) Christoph.”

I had originally read the abbreviation aedc as aedt, for aedituus, meaning “sacristan” or “sexton,” but Mente Pongratz set the record straight that it’s actually aedicularius meaning homeowner, equivalent to the term Häusler in German. Moreover, he added that the Latin term aedic. fil. is equivalent to the German word Häuslerssohn, which is the son of homeowner, as opposed to the idea that the priest was describing Joseph Urban as both as homeowner and a son. William F. Hoffman further clarified that the midwife’s given name was likely to be Crescentia, based on the previous entry on the page, which reads “Obst Cresc. Christoph.” In any case, the birth date on this record matches exactly with the date of birth reported by Wenzel Meier on U.S. records, and his parents’ names, which were recorded as John Meier and Mary Uhrman on U.S. documents, are also sufficiently similar that we can be sure this is a match. The variation in surname spelling, Maier rather than Meier, isn’t a big deal, despite the popularity of the surname.

It was Wenzel’s parents, then, whose marriage record from 27 October 1857 I translated in that previous blog post. And now you know a bit more of their story.

Join 1,059 other followers
Follow From Shepherds and Shoemakers on WordPress.com