As genealogy researchers, we often stumble upon interesting historical tidbits while researching other things. Since time for research and writing is limited, I do my best not to let my curiosity take me too far down the rabbit hole into further exploration of those individuals or events. Yet sometimes, those individuals stay with me, returning to my thoughts every now and then, so I decided to write about two of them today.

Lament for a Nameless Child

The first item I’d like to share is a death certificate I discovered recently while reviewing the entry for Thomas Coyle on the same page. Number 2827, bordered in red on the image below, is the death certificate for an unnamed child from Nepean township, Carleton County, Ontario.1 Records on this page were erroneously described in the FamilySearch catalog as being from the city of Toronto, some 400 km away. 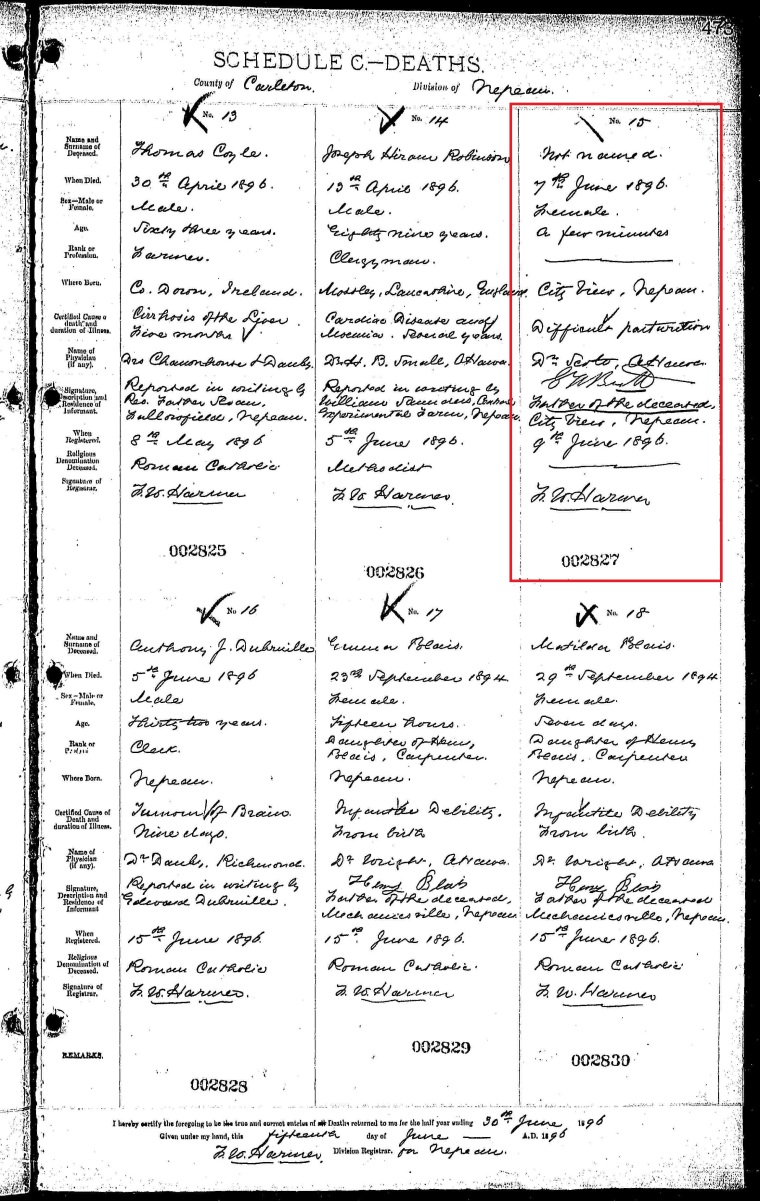 The death record is for an unnamed baby girl who died on 7 June 1896 having lived for just a few minutes. As was typical for civil death records from Canada in this era, no parents’ names were required on the form, so her identity may be lost to the descendants of any siblings she may have had. Her cause of death was noted to be “difficult parturition,” meaning she died as a result of some trauma from her birth. The informant was her father, who was a resident of City View, which is a neighborhood formerly located in Nepean, which is now located in Ottawa.

As family historians, we often think in terms of preserving the stories of those who have gone before us. Stories like this one, of lives ended before they’d even begun, always make me sad. Perhaps there’s a genealogist out there somewhere who’s researching a family from Nepean, wondering about that gap in the births of the children, noting that there should have been another baby born circa 1896. Or maybe that genealogist has already discovered a Catholic burial record which identifies the parents for this little one, so this civil death record is just one more piece of evidence to document a life cut short. In an era when infant mortality was so much higher than it is today, it’s quite possible that her parents had already lost children prior to the death of this baby girl, yet losses like this aren’t something one ever forgets. I hope that her parents and any siblings found some measure of peace in this life after her death, and as a person of faith, I also hope that the souls of all the family are reunited in the joy of the next life.

The second historical tidbit is this 1891 baptismal record for Cinderella Maria Howe, found in the records of St. Stephen’s parish in Middleport, Niagara County, New York.2 I stumbled across it one day last year when researching my husband’s Lewandowski/Levanduski ancestors (there’s a baptismal record for Joseph Levanduski on the preceding page).

The record is in Latin, and it states that Cinderella Maria Howe was baptized on 15 August 1891, and that she was the daughter of Morgan L. Jones and Elizabeth White. Godparents were Maria Butler and Daniel Hurlihan. All of this is pretty standard, apart from the uncommon given name, but what really intrigued me was the fact that Cinderella was 62 years old at the time of her baptism, having been born on 13 February 1829.

Although people can get baptized into the Roman Catholic faith at any age, infant baptism is common practice. So if one is researching ancestors that one knows or suspects were Catholic, one might expect to find a baptismal record within a year or so after birth, not 62 years later. A researcher investigating the family of Cinderella (née Jones) Howe would have absolutely no reason to go looking for her baptism in these records, in this time period, unless there were an oral family tradition which stated that Cinderella was baptized as a Catholic late in life. Moreover, since these church records from St. Stephen’s are not presently indexed online, this record can only be found by browsing through the digital images, page by page, or by visiting the parish. (More information on finding such unindexed scans at FamilySearch can be found here.)

Quick searches on Ancestry and FamilySearch reveal quite a lot of “low-hanging fruit” in the form of easily-found documents that can further inform us about the life of Cinderella Howe, but this baptismal record was not cited in any of the family trees I reviewed that mention Cinderella. This is perhaps unsurprising in light of the factors already discussed. One wonders what the factors were that inspired her to convert to Catholicism at the age of 62. As a widow who had buried her husband a few years previously, was she merely pondering her own mortality, and felt drawn to the Catholic faith? Were there other family members who converted as well? Perhaps these questions will one day be answered by one of her descendants. In the meantime, I need to climb back out of the rabbit hole and get back to my own genealogy projects. Those dead ancestors aren’t going to research themselves.

3 thoughts on “Down the Rabbit Hole”