Although I’m mostly working on my Walsh research these days, there’s some Polish research that’s in the back of my mind that I thought I’d write about today. This research relates to an exciting DNA match I found recently on my Mom’s side. Although I still don’t know exactly how we’re related, I’m sure we’re on the right track.

Like many of you, I regularly check my list of new “close” matches (4th cousins or better) at the sites where I have done DNA testing with various family members. Since I’m fortunate enough to have test data for both my parents, I prefer to check their match lists rather than my own since their matches yield better information about earlier generations of the family. During one of the checks on Mom’s matches, I noticed a 4th-cousin-level match to Ron Wilczek, who gave me permission to use his name in my blog. Ron had a tree linked to his DNA data, and I was immediately intrigued by the fact that his grandfather was reported to be a Polish immigrant to North Tonawanda, New York, named Stanisław Wilczek. Both the surname and the location were significant to me, because my mom’s grandfather was another Polish immigrant to North Tonawanda named Joseph Zielinski, and Joseph’s great-grandmother was Marianna Wilczek.

The Wilczek family of Młodzieszyn Parish

Marianna was born circa 1810, and she married Antoni Kalota in the parish of Młodzieszyn in 1830. The record of their marriage was kindly obtained for me through onsite research at the parish by my friend Justyna Cwynar, and is shown in Figure 1. 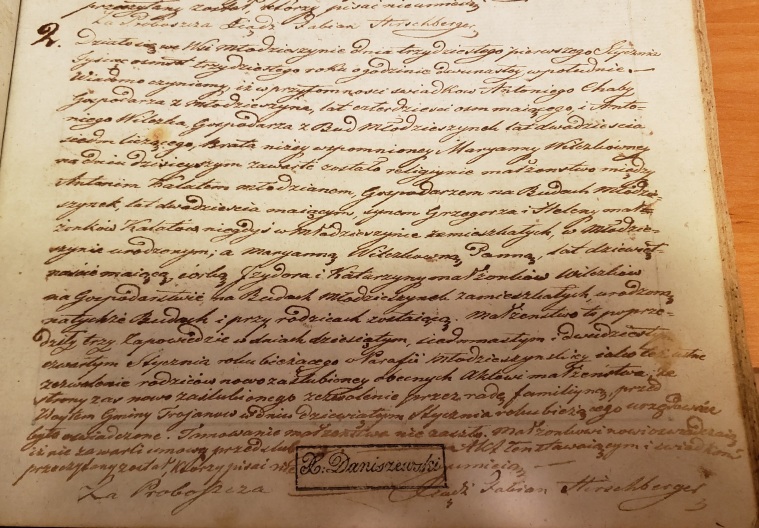 The record is written in Polish, and in translation it states,

“No. 2. This happened in the village of Młodzieszyn on the thirty-first day of January in the year one thousand eight hundred thirty at twelve o’clock noon. We declare that—in the presence of witnesses, Antoni Chaba, land-owning farmer of Młodzieszyn, having forty-eight years of age, and Antoni Wilczek, land-owning farmer of Budy Młodzieszynek, having twenty-seven years of age, brother of the aforementioned Marianna Wilczkówna—on this day was concluded a religious marriage between Antoni Kalota, bachelor, land-owning farmer of Budy Młodzieszynek, age twenty years, son of Grzegorz and Helena, the spouses Kalota, former residents of Młodzieszyn; born in Młodzieszyn; and Miss Marianna Wilczkówna, age nineteen, daughter of Izydor and Katarzyna, the spouses Wilczek, residing as land-owning farmers in Budy Młodzieszynek; born in that same place and living there with her parents. The marriage was preceded by three announcements on the tenth, seventeenth, and twenty-fourth days of January of the current year in the parish of Młodzieszyn and likewise by the oral permission of the parents of the bride, present at the marriage act; on the part of the groom, permission was officially declared by the family council before the village mayor of gmina Trojanów on the ninth day of January of the current year. There were no impediments to the marriage. The newlyweds stated that they had made no prenuptial agreements. This document was read to the declarants and witnesses who are unable to write. [signed] Pastor Fr. Fabian Hirschberger.”

Marianna’s name was recorded as Wilczkówna, but this is merely an old-fashioned form indicating an unmarried woman of the Wilczek family. She was noted to be the daughter of Izydor and Katarzyna, whose maiden name was not provided in this document.

The second witness on the marriage record for Antoni Kalota and Marianna Wilczek was Antoni Wilczek, who was also identified as her brother, and whose age suggests a birth circa 1803. The record states that Marianna was born and residing with her parents in “Budy Młodzieszynek,” a place which does not appear in the Słownik geograficzny Królestwa Polskiego i innych krajów słowiańskich (Geographical Dictionary of the Kingdom of Poland and Other Slavic Lands). It’s unclear from this record whether the village of Młodzieszynek was intended, or instead the village of Budy Młodzieszyńskie, both of which belonged to the parish in Młodzieszyn. According to the Słownik, Budy Młodzieszyńskie had 44 homes, while Młodzieszynek had 15 homes circa 1827, contemporaneous with the time frame for the marriage of Marianna and Antoni Kalota. 2

Mom and Ron share a single segment of DNA on Chromosome 17. The matching segment consists of 26.3 cM and 11,008 single nucleotide polymorphisms (SNPs), according to the chromosome browser at MyHeritage, where Ron uploaded his raw DNA data from Ancestry. The Shared cM Tool at DNA Painter, which offers statistical probabilities for each relationship that is possible based on a given amount of shared DNA, reports a 55.88% chance that the relationship between Mom and Ron is pretty distant, along the lines of 4th-8th cousins, but encompassing a number of possible relationships within that range (Figure 2).

Figure 2: Most probable relationships predicted by 26.3 cM shared DNA, according to DNA Painter.

26.3 cM is likely to be identical by descent, indicative of shared ancestry, rather than by identical by chance, i.e. a false positive. However, the Wilczek surname is sufficiently common throughout Poland that we cannot assume that this is necessarily how Ron and Mom are related without documentary evidence to prove the relationship (Figure 3).

Figure 3: Approximate geographic distribution of the Wilczek surname throughout Poland, circa 2009, courtesy of Nazwiska Polskie. Numbers in colored circles indicate approximate number of bearers of the surname in that region.

So what do we know—or what can we discover—about the origins of Ron’s Wilczek ancestors that might help confirm the hypothesis that the connection lies with the Wilczek family of Młodzieszyn parish?

According to Ron’s tree, his grandfather, Stanisław, was the son of Izydor and Sophia Wilczek, both of whom also immigrated from Russian Poland to North Tonawanda. Izydor is not an especially common Polish given name, and its appearance in both Ron’s family and my own offers further evidence that our connection lies somewhere within the Wilczek family of Młodzieszyn. The 1910 census shows the Wilczek family living at 36 Eighth Avenue in North Tonawanda (Figure 3).

Figure 3: Extract from the 1910 census showing Izydor Wilczek and his family in North Tonawanda, New York.3

According to the information in the census, Izydor was born circa 1874 in Russian Poland and had been married for 15 years, suggesting a marriage date circa 1895. He was reported to have immigrated in 1903 but was not a naturalized citizen. His wife, Sophie, arrived three years later in 1906. Although there were only four children living with the family in 1910, the census revealed that Sophie was the mother of 8, so we know there were four additional children that we need to identify in order to get a complete picture of the family.

In addition to the 1910 census, Ron’s tree contained one another piece of information that was especially interesting. His tree stated that his grandfather, Stanisław Wilczek, was born in Żyrardów, Poland, a town which is located some 40 km south of Młodzieszyn (Figure 4).

Figure 4: Locations of Żyrardów and Młodzieszyn within the Mazowieckie province of Poland, courtesy of Google Maps.

If Ron’s Wilczek ancestors were originally from Żyrardów or nearby villages, that would fly in the face of my hypothesis that we descend from common Wilczek ancestors in Młodzieszyn. Could his information be incorrect? Or did his branch of the Wilczek family move south, and if so, how long ago?

Geneteka to the Rescue, Again!

Fortunately, this was an easy thing to check. Records for Żyrardów are indexed in the popular Polish vital records indexing database, Geneteka, for the time period when Stanisław Wilczek and his siblings were born. A quick search for records pertaining to Izydor and Zofia (the Polish version of the name Sophie) Wilczek demonstrated that Ron’s oral family history was accurate: Stanisław Wilczek was born in Żyrardów (Figure 5). 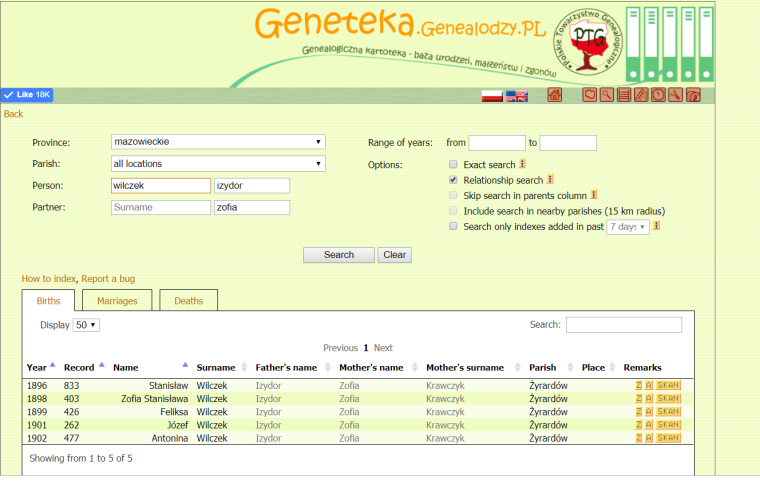 In addition to Stanisław’s birth record, this search also produced birth records for the two Polish-born siblings mentioned in the 1910 census, Feliksa and Antonina. Furthermore, it identified two of the children born to Zofia Wilczek who were reported to be deceased prior to 1910, Zofia Stanisława and Józef. Their death records can be found by clicking over to the “Deaths” tab in the search results. Best of all, the marriage record for Izydor and Zofia was also indexed and linked to a scan, which is shown in Figure 6.

The marriage record is written in Russian, and is translated as follows:

“No. 63. Teklinów and Budy Stare. This happened in the town of Żyrardów on the 12th/24th day of February 1895 at 7:00 in the evening. We declare that—in the presence of witnesses, Antoni Peńsko and Jan Wysocki, both adult laborers residing in Ruda Guzowska—on this day a religious marriage was contracted between Izydor Wilczek, bachelor, reserve solder, farmer, born in Budy Stare in Młodzieszyn parish, and residing in that place with his parents; son of Andrzej and Anna née Kornacka, the spouses Wilczek, age 30; and Zofia Krawczyk, single, seamstress, born in Kuznocin, Sochaczew parish, and residing in Teklinów, daughter of the unmarried Marianna Krawczyk; age 20. The marriage was preceded by three readings of the banns in the local parish church and in the parish of Młodzieszyn on the 10th, 17th, and 24th days of February of this year. No impediments to the marriage were found. The newlyweds stated that they had made no premarital agreements between them. Permission for the marriage of the underage bride was given orally by the stepfather, Jan Skrzyński, present at the marriage act. The religious ceremony of marriage was performed by Fr. Kazimierz Nowosielski, vicar of the local parish. This document was read aloud to the newlyweds, witnesses, and stepfather, who are illiterate, and was signed by Us. [signed] Acting Civil Registrar, Fr. Jan Ka??? [illegible]”

So Izydor was indeed born in a village belonging to Młodzieszyn parish, and he was still living there at the time he married Zofia. This confirms my hunch about Izydor’s origins and suggests that I’m on the right track. It may be that the common ancestor shared between me and Ron was a Wilczek from Młodzieszyn. The record goes on to identify Izydor’s parents as Andrzej Wilczek and Anna Kornacka, who were unknown to me, so further research in the records of Młodzieszyn is needed to elucidate the relationship between Izydor Wilczek and my great-great-great-grandmother Marianna (née Wilczek) Kalota. However, the record also presents a plot twist: the bride, Zofia Krawczyk, was a native of the village of Kuznocin in Sochaczew parish! This is potentially relevant because I’ve traced my Krzemiński, Bielski, and Świecicki ancestors back to villages belonging to Sochaczew parish, so it muddies the waters quite a bit when it comes to determining the common ancestor from whom Mom and Ron inherited that segment of DNA on Chromosome 17. Moreover, it’s problematic that Zofia’s father is unknown, as our connection might lie with him.

Although an answer to this problem is not immediately apparent, it may be that additional research can present the solution. In the meantime, it’s obvious that we’re on the right track. This is a story that will be continued…. stay tuned!

4 thoughts on “Puzzling Through a DNA Match”