Genealogy and a love of old maps seem to go hand in hand, and I’m always excited to find new sites where I can find maps relevant to my geographic research areas. One site that’s especially nice for those researching Canadian ancestors is the Canadian County Atlas Digital Project site, hosted by McGill University. The site includes an impressive 43 atlases originally published between 1875–1881 from counties in Ontario, Quebec, and the Maritime provinces, but the best part is that property owners’ names were marked on the township maps. The site permits searching by surname (Figure 1), or alternatively, individual township maps can be selected from an 1880 map of Ontario counties (Figure 2)

Figure 2: Search screen for selecting counties based on 1880 map.

So for example, a surname search for “Hodgkinson” produces 8 matches, including two which pertain to land owned by my 4x-great-grandfather, Robert Hodgkinson (Figure 3).

Clicking “Go” for the first result shown indicates that Robert Hodgkinson owned a parcel of 130 acres on Lot 8, Concession I (Figure 4).

In Upper Canada following the American Revolution, undeveloped land was divided into townships, which were then subdivided into concessions, which were typically rectangular parcels of land, 1 1/4 miles wide, with concession roads running between them. Concessions were then divided into 200-acre lots, which could be further divided as needed. Robert Hodgkinson’s parcel of land, located on Lot 8, Concession I, can be viewed by clicking “Locate on Map,  which produces a close crop of the parcel in question as well as a thumbnail image of the map on which the parcel appears (Figure 5).

Figure 5: Mapped location of first parcel of land noted to be owned by Robert Hodgkinson.

When the process is repeated for the second search result in Figure 3, we can see that Robert Hodgkinson owned a second parcel of land immediately south of the first parcel, located on Lot 8 on Concession II.

To view these parcels in a broader geographic context, we can find the map on which they appear by returning to the map search page shown in Figure 2. Lincoln County is number 9 on the map index, and clicking on it produces a map from which individual townships can be selected (Figure 6).

Clicking on Grantham township produces a map of Grantham from 1876 (Figure 7) with an option to click to a closer view. 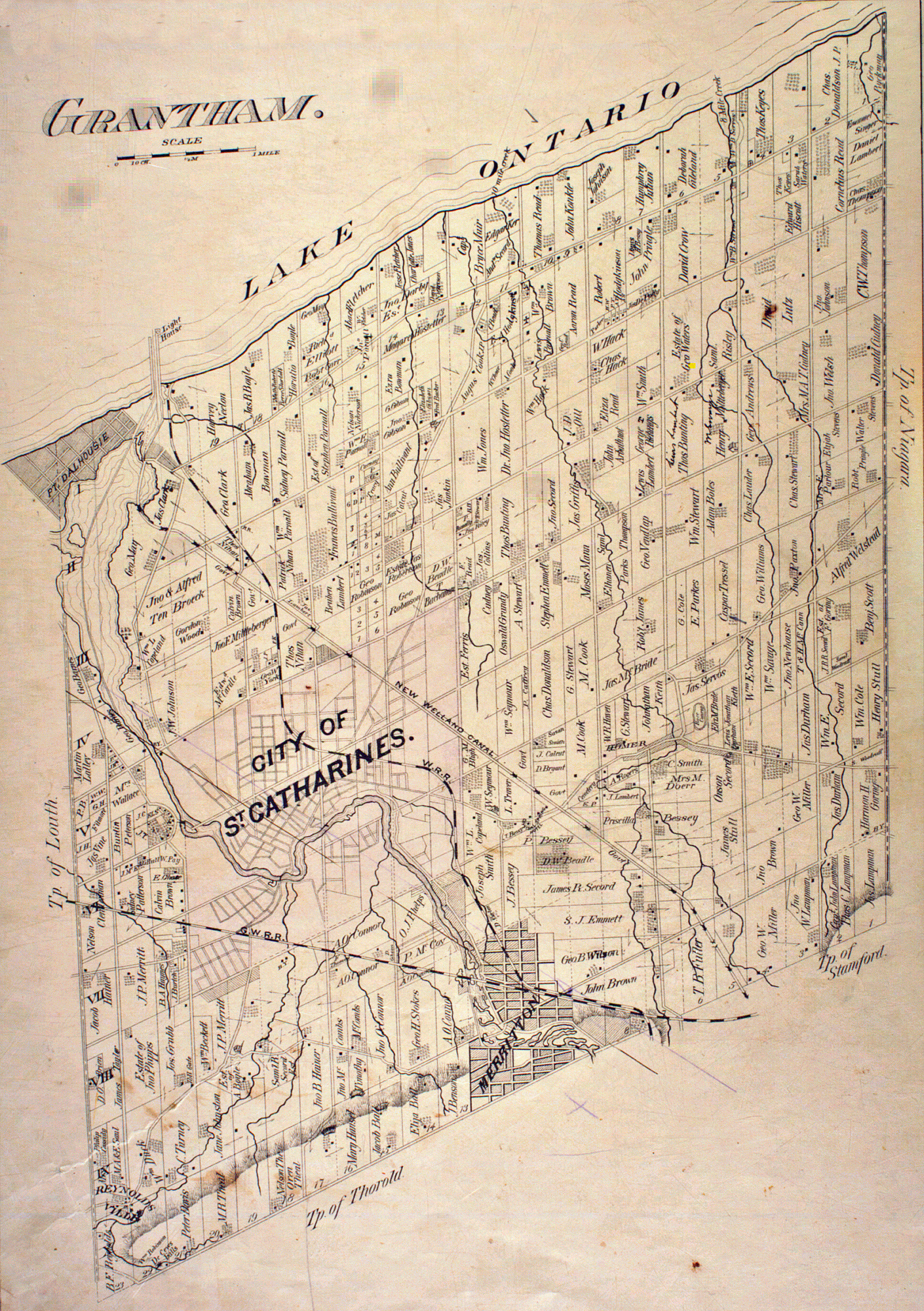 Zooming in really allows us to see the lay of the land, so to speak, and both parcels of  Robert Hodgkinson’s land on Lot 8, Concession I and Lot 8, Concession II are clearly indicated (Figure 8). It’s evident that lots were numbered from east to west, starting at the border of Grantham Township and Niagara Township to the east, and concessions were numbered from north to south, starting at Lake Ontario.

What’s interesting here is that Robert Hodgkinson’s name was associated with these parcels of land as late as 1876, when the map was created, although he died in 1861, as his grave marker asserts (Figure 9).

As it happens, an earlier map of the area can be found thanks to a similar mapping project, the Ontario Historical County Maps Project, hosted by the University of Toronto. This project includes maps of 54 counties, produced between 1856 and 1888, and new maps continue to be added to the database. The main search page is shown in Figure 10.

The map can be explored in several ways. Clicking on a county of interest, such as Lincoln County, reveals the source maps that were used for the site, and offers an option to download the scanned images (Figure 11). In the case of Lincoln County, the source map is from 1862, the year after Robert Hodgkinson died, and 14 years earlier than the map available from the Canadian County Atlas Digital Project.

To quickly locate a particular land owner, one can search the Land Occupants Database by clicking the magnifying glass icon located near the upper right corner of the page (Figure 12). The database offers the capability to search by first and last name, and an option to generate a list of all the names found in a particular township, as well as an advanced search option which permits searching by lot number and concession number.

A search for all land occupants with the surname Hodgkinson in this database returns three results, two of whom were land owners in Grantham:  F.A. Hodgkinson, on Concession II, Lot 11, and Hodgkinson with no given name specified, on Concession I, Lot 8. Selecting that second option pinpoints it on the map (Figure 13).

Figure 13: Search result for Hodgkinson on Concession I, Lot 8 in Grantham.

Zooming in reveals that the indicated plot is actually one of two plots owned by the estate of R. Hodgkinson (Figure 14). This is consistent with the information obtained from the 1876 map, which indicated that Robert Hodgkinson owned part of Lot 8 on Concession I, in addition to owning all of Lot 8 on Concession II, and with the fact that Robert Hodgkinson himself died in 1861, so the land would have been in the possession of his heirs by 1862 when the map was created.

Having two maps created 14 years apart also enables us to note changes in ownership. According to the 1876 map, the lakefront portion of Lot 8 on Concession I was owned by Joseph Johnson (Figure 8), which suggests that Robert Hodgkinson’s estate must have sold that portion of the land some time between 1862 and 1876 when the second map was created.

Figure 14: Close-up view of parcel owned by the estate of R. Hodgkinson, boxed in red.

Zooming in still further converts the historical map to the current road map, and Robert Hodgkinson’s land is shown to be bordered by Read Road to the west, with Lakeshore Road running between Concessions 1 and 2, and Church Road bordering the Hodgkinson parcel to the south (Figure 15). Thomas Bate’s land lay in between the Hodgkinson land and Stewart Road, so the eastern border of the Hodgkinson land lies approximately halfway between Read Road and Stewart Road. The map also reveals that Read Road forms the present-day border between St. Catharines and Niagara-on-the-Lake, so the former Hodgkinson property lies right at the western end of present-day Niagara-on-the-Lake, Ontario.

Of course, it’s always fun to check the satellite view to see what lies on one’s ancestral lands today. In this case (Figure 16), it looks like Lakeview Vineyard Equipment is located on Robert Hodgkinson’s land, along with a number of other homes and businesses with addresses along Read, Lakeshore, and Church Roads. There’s also quite a nice luxury home on a 21-acre estate that is most definitely located on land that once belonged to Robert Hodgkinson.

Figure 16: Satellite view of Robert Hodgkinson’s land today, with the approximate location of Lot 8 on Concession 1 boxed in red.

Anyone with ancestors who were landowners in Ontario in the mid-to-late 19th century can easily lose a few hours playing with these maps. They offer a fascinating glimpse into the past, as well as a bridge to the present. Inspired by these maps, I think I’ll plan a trip to Niagara-on-the-Lake this summer, and include a drive down Read Road, turning onto Lakeshore. I’ll park the car someplace where I can look out across the fields, feel the sunlight on my skin and the breeze in my hair. And I’ll remember that, once upon a time, Robert Hodgkinson, whose DNA I carry, probably looked out across those same fields more than a century before I was born.