For the past two weeks I’ve been on a hiatus from genealogy due to a family health crisis. Today, I’m celebrating both the end of that crisis, and a new DNA match. The DNA match isn’t that new, actually, but I think I’ve figured out just how my new cousins and I are related.

The story began last August, when I wrote to some new matches that appeared in my list at Ancestry.  The matches were siblings, and Ancestry predicted with high confidence that my match to both of them was in the 4th-6th cousins range, spanning 30 centimorgans (cM) across 2 chromosomes.  Both of my matches responded to my messages and suggested that I get in touch with their sister, Carol, who had not yet tested her DNA but who was the more avid family historian in the family. As can happen with all of us, life can get in the way of genealogy research, so I didn’t hear from Carol until a few days ago, when we began comparing notes to see if we could determine how we might be related.

Carol told me that her family had roots in Prussian, Russian and Austrian Poland, which suggested a match on my mom’s Polish side. This was supported by the fact that her sibings matched me, but not my Dad’s sister. However, there was also no match between Carol’s siblings and either my mom’s maternal first cousin, or my third cousin on my mom’s maternal side. Although there were no surnames in Carol’s family tree that jumped out at me, I noted with interest that her father’s paternal line was from Zagórów. Unfortunately, this appeared to be a red herring:  although I, too, had family from Zagórów, my ancestors were from Zagórów in Słupca County, Wielkpolskie province, while Carol’s tree stated that her ancestors were from Zagórów in Limanowa County, Małopolskie province, nearly 300 miles away.

However, as Carol and I messaged back and forth, she commented that her father had cousins living in Poland in Konin and Poznań, both of which are located in Wielkopolskie County. Moreover, she mentioned that she had found documents for her family at the Słupca Genealogy site, a fantastic resource which contains indexed vital records specifically from Słupca and Kalisz Counties in Wielkopolskie province, but not from anywhere else in Poland. Finally she mentioned that the name of the church that her father’s family attended in Zagórów was Sts. Peter and Paul the Apostles, which is definitely the name of the parish for the Zagórów in Wielkopolskie province, and not the one in Małopolskie province. By this point the evidence was clear:  Carol’s family was from the same Zagórów that my ancestors were from, in Wielkopolskie province.  It’s not an uncommon error for a newcomer to Polish genealogy to make, to confuse two locations with the same name, and it makes a big difference

Having cleared up that misconception, the game was now afoot. A common point of geography would be a logical place to begin looking for our connection. I took a closer look at her family tree, paying attention to the surnames that were from Zagórów. It’s been a while since I did any research on my Wielkopolskie lines, and by “a while,” I mean about a decade, so I was a little surprised to find that the answer had been staring me in the face since last August:  Celia Przystańska.

According to her family tree, Carol’s paternal grandparents were Jan Myśliński, and Celia Przystańska, who was born about 1870 in Zagórów.  I had forgotten that I had the Przystański surname in my own family tree — but lo, and behold, my tree includes one Cecylia Przystańska, born 1863 in Zagórów! Cecylia was the daughter of Marcin Przystański and Katarzyna Tuzik. Here’s her birth record (Figure 1): 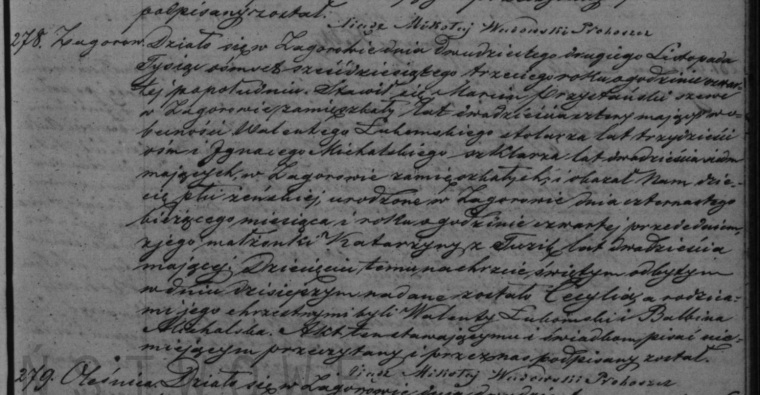 The record is in Polish and reads,

“#278, Zagórów. This happened in Zagórów on the twenty-second day of November in the year one thousand eight hundred sixty-three at four o’clock in the afternoon.  He appeared, Marcin Przystański, shoemaker residing in Zagórów, having twenty-four years of age, in the presence of Walenty Łukomski, carpenter, age thirty-eight, and Ignacy Michalski, glazier, age twenty-seven, residents of Zagórów, and showed us a child of the female sex, born in Zagórów on the fourteenth day of the current month and year at four o’clock before day of his wife, Katarzyna née Tuzik, age twenty. To this child at Holy Baptism, performed today, was given the name Cecylia, and her godparents were Walenty Łukomski and Balbina Michalska. This document was read to the declarant and witnesses, who are illiterate, and was signed. [signed] Fr. Mikołaj Wadowski, pastor”

Katarzyna Tuzik was married to Marcin Przystański in 1862 in the nearby village of Kowalewo-Opactwo.  Their marriage record is also found online (gotta love Szukajwarchiwach!) and describes the bride as, “Miss Katarzyna Tuzik, having twenty years of age, daughter of Michał and the late Maryanna; born in Wierzbno and living in that same place with her father….” Although Maryanna’s maiden name is not mentioned here, there is substantial evidence available which indicates that she was Marianna Agata Dąbrowska, daughter of Maciej Dąbrowski and Barbara Słońska. This is where the DNA match comes in — Maciej and Barbara were my own great-great-great-great-grandparents. I’m descended from their daughter, Jadwiga Anna, who married Stanisław Grzesiak.

Here’s the relationship chart (Figure 2), which demonstrates that Carol and I are 5th cousins (her maiden surname is used with permission).

Figure 2:  Relationship chart showing relationship between me and cousin Carol. 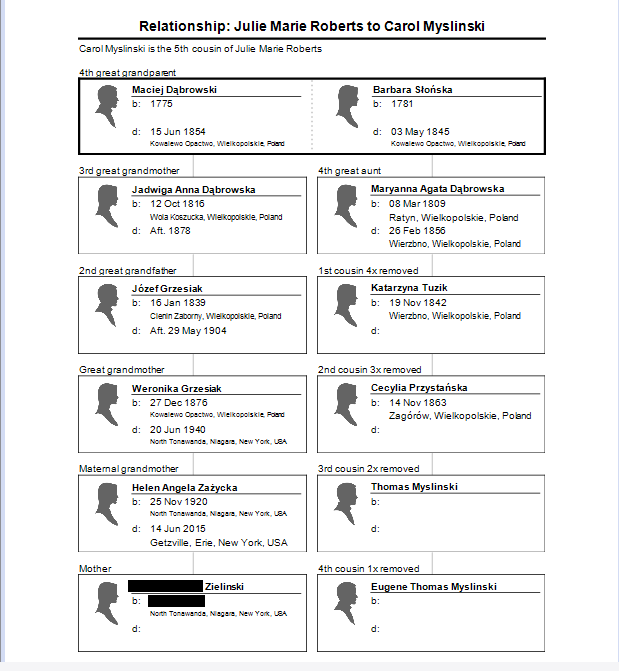 I’ve discovered that these charts can be a little confusing to the uninitiated.  The couple at the top are our common ancestors, Maciej and Barbara Dąbrowski, but after that, the chart shows our lines of descent, not married couples.  Thus, Carol descends from Maciej and Barbara’s daughter, Marianna Agata, whereas I descend from their daughter Jadwiga Anna.  Marianna Agata married Michał Tuzik (not shown in the chart) and their daughter, Katarzyna Tuzik, carries on the line of descent on Carol’s side. On my side, Jadwiga’s husband Stanisław Grzesiak is not shown, but their son Józef Grzesiak carries on the line of descent. The last generation shown on this chart is my Mom and Carol’s late father — Carol and I would run onto a second page of the chart, but I think the general idea is clear.

So, this is a promising lead to the possible connection between Carol and me.  A couple things still need to be ironed out, of course. We don’t yet have the marriage record for Cecylia Przystańska and Jan Myśliński, which is necessary to verify Cecylia’s parents’ names. However, the marriage has been indexed at Słupca Genealogy, (Zagórów, 1886, #42), and although records from this year are not available online, they’re on microfilm from the Family History Library. If the marriage record shows that Cecylia’s parents were, in fact, Marcin Przystański and Katarzyna Tuzik, then the documentary evidence would fit nicely with the DNA evidence.

None of my new cousins have uploaded their DNA to GEDmatch yet, so it’s unfortunately impossible to get a good sense of which chromosomes and what locations are involved in the match. Moreover, without an upload to GEDmatch, I can’t compare their DNA to that of my late grandmother, whom I tested with FTDNA and not Ancestry. That will be a key comparision to make, because Carol’s siblings, Grandma, and I, will all have to share some overlap in the matching regions. It’s not possible for me to match these cousins according to this pedigree if they do not also match Grandma, because she must be the source of my matching DNA.

The amount of shared DNA itself, as reported by Ancestry, is acceptable for this match and would support the predicted relationships.  According to this chart by Blaine Bettinger (Figure 3), 5th cousins share on average 17 cM, with a range of 0-42 cM.  This relationship — 30 cM across two chromosomes — is at the high end of the range, but still plausible. 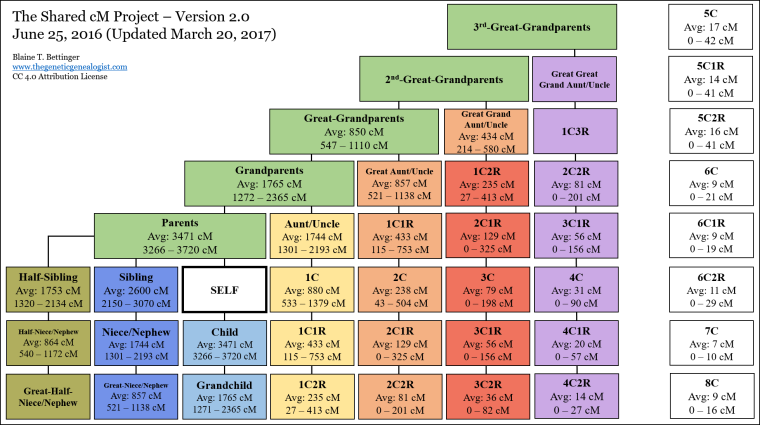 The fact that it’s perfectly possible for 5th cousins to share NO DNA (0 cM) also explains another facet of this puzzle that I mentioned in the beginning. One of the first steps I take when evaluating a DNA match is to check to see what matches exist in common with the new match.  In this case, my Myslinski cousins did NOT match a documented and genetic third cousin to me on our common Grzesiak line, nor did they match my mother’s first cousin on her maternal Zazycki line. How can this be?

Let’s examine each of those situations separately. My cousin Valerie descends from my great-grandmother’s sister, Józefa Grzesiak. Józefa would have inherited half of her DNA from her father, Józef Grzesiak, and a quarter of her DNA from her father’s mother, Jadwiga Dąbrowska.  Jadwiga inherited all her DNA from her own parents, Maciej Dąbrowski and Barbara Słońska, who are the common ancestors in this puzzle. Remember that these numbers are averages — the amount of DNA that one inherits from such distant relatives can vary a bit, due to the genetic recombination that occurs in each generation. Similarly, my great-grandmother, Weronika Grzesiak, would have inherited a quarter of her DNA from Jadwiga Dąbrowska — but although the proportion of inherited DNA is roughly the same as what her sister Józefa would have inherited, the content can be quite different — there’s no guarantee that the same genes from their great-grandparents Maciej and Barbara were inherited by both Weronika and  Józefa.

So it’s perfectly possible for the same bit of DNA to have been passed down from common ancestors Maciej and Barbara to me and to cousin Carol, but not to cousin Valerie. (At this point we don’t know which one of my 4x-great-grandparents, Maciej or Barbara, contributed the matching segment that is carried by me and by my Myslinski cousins.) Similarly, it’s possible for me to have inherited this bit through my maternal Grandmother, even though my mother’s maternal cousin did not inherit it.  Mom’s cousin, Fred, is 4th cousin once removed to cousin Carol. According to the above chart, fourth cousins once removed share an average of 20 cM, with a range from 0- 57 cM. So it’s possible that Grandma inherited that crucial bit of DNA from Maciej or Barbara that her brother (Fred’s father) did not inherit. Therefore she was able to pass it on to me, resulting in a match between me and Carol, that is not shared by Fred.

All of this demonstrates the fact that DNA evidence can support a documented relationship, but when it comes to ancestors as far back as this, a lack of DNA evidence cannot disprove a documented relationship. It’s actually quite remarkable to me to think that the same tiny bit of DNA was passed down from parents Maciej and Barbara to both of their daughters (Jadwiga and Marianna) who in turn managed to pass that bit down through several additional generations, so that cousin Carol and I show up as matches at all. Hopefully this helps to illustrate what a powerful weapon DNA testing can be in your arsenal of genealogy techniques.  If you have any recent discoveries that have come about through DNA testing, please let me know about them in the comments — I’d love to read your stories!  Happy researching!

Join 1,081 other subscribers
Follow From Shepherds and Shoemakers on WordPress.com