One of the most persistent myths in American culture is that our family surnames were changed at Ellis Island.  Just how ingrained is this myth?  Well, when my younger two children were in 5th grade, their school included an Ellis Island simulation as part of a learning module on immigration.  After learning about the “great American melting pot,” the economic and social factors that prompted immigration, and some of the contributions and impact that immigrants had on American society, the students capped off the unit with an Ellis Island Day immigration simulation. Prior to the simulation, students were assigned names and identities (hypothetical, not historical) of various”immigrants” from the late 19th century. They created costumes that would have been typical for their assigned immigrants and when Ellis Island Day came, these “immigrants” were “processed” by teachers and parent volunteers posing as immigration officials.  Processing stations included mock health inspections and checking of documents, and at one station, parent volunteers were instructed to inform some of the “immigrants” that their names were “too foreign-sounding” so, “we’ll call you Mary Smith from now on.”

Although I applaud the idea of an immigration learning module and think that the Ellis Island Day simulation is a fun way for the kids to experience what the process might have been like, I found this particular element of the simulation to be appalling since it reinforces the very myth that so many of us genealogists have tried to dispel. When I attempted to explain this to the teacher, and then to the school administration, I was told, “You’re arguing with History.”

The idea that names were changed at Ellis Island raises lots of questions. For instance, if names were changed, what happened to the paperwork? And if inspectors were charged with changing names, why are there no records of this? Where are the lists of approved names? Where are the first hand accounts, of inspectors and immigrants? If immigrants had name changes forced upon them, why did they not simply change their name back when they entered the country? Or, if they could not, where is paperwork describing the roles of Federal officials charged with making sure that names were not changed back?

It underscores the lack of thought that goes into the knee-jerk assertion about those name changes.  The myth of Ellis Island is so easily accepted that most people don’t bother to consider the implications, but if one takes a moment to do that, the myth quickly falls apart.

So what really happened?  How did we end up with so many distorted, truncated, or translated versions of our immigrant ancestors’ surnames?  Here’s one example from my own family history.

My maiden name, Roberts, was originally Ruppert.  My immigrant ancestors were the family of Franz and Catherina Elisabeth (née Schulmerich) Ruppert, who were married in the little village of Heßloch in 1830, in what was at the time the Grand Duchy of Hesse, colloquially known as Hesse-Darmstadt (Figure 1):

The Ruppert family included their three sons, Johann Georg, Michael, and Arnold, as well as daughter Catherina Susannah.  Michael was my great-great-great-grandfather.  In 1851, Georg traveled to the U.S.,3 followed by the rest of the family in 1853.4 Their passenger manifest is shown below (Figures 2a and 2b).

Figure 2a:  Passenger manifest from the William Tell, arriving on 4 March 1853, showing parents Franz and Catherine and son Michael Ruppert.

To me, the name looks like it’s written as “Rupert,” although the transcriber at Ancestry indexed it as “Rupard.”  The ages of the family members agree well with their ages based on their baptismal records from Germany.  The manifest is not especially informative, which is typical for earlier manifests like this, mentioning only that their place of origin was Württemberg, their destination was the United States, and Franz’s occupation was a brewer.

One might argue that my family surname clearly wasn’t changed at Ellis Island because in the case of my Rupperts, they didn’t enter the U.S. through Ellis Island at all. The Ellis Island inspection station didn’t open until 1892, and its predecessor, Castle Garden, did not open until 1855. In the first half of the 19th century, when the Rupperts came over, immigrants merely landed at docks around South Street in Manhattan. However, I’m willing to bet that the vast majority of people who purport that their family names were changed at “Ellis Island” probably have no idea at which port or on what date their immigrant ancestors actually arrived in the U.S. When it comes to the myth, the main idea seems to be that the name change resulted from something the immigrants were told by someone in an official capacity when they entered the U.S.

So, my ancestors were Ruppert in Germany, and a reasonable misspelling thereof was recorded on their passenger manifest.  What happened in the U.S.?

By 1860, the family had settled in Detroit, Michigan and had already begun using the name Roberts, as evident from the 1860 U.S. Census (Figure 3).5

As anyone who has ever done genealogy for more than five minutes can tell you, names were pretty fluid up until, say, the 1930s. So in 1870, the family surname was recorded as Robert (Figure 4).6

In this census, we see that Michael “Robert” was still employed as a carpenter and that two more children had been born to the family, daughters Paulina and Anna and a son, Heinrich. Michael’s wife Mary’s name appears here as Magdalena. Michael’s parents, Frank and Catherine Robert were still living nearby, and the fact that their name was also recorded as “Robert” and not “Roberts” suggests that this was a version of the surname that the family was collectively trying out at that time, rather than simply a recording error on the part of the census-taker. Frank was also recorded as Franz once again.

By 1880, Franz and Catherine were living on Prospect Street and were continuing to use the surname Robert, although Franz was recorded as Frank once again, as shown in Figure 5.7

Frank, God bless him, was still a laborer at age 72, while Catherine continued to keep house. The 1890 census cannot be consulted to see what name they were using at that time, since most of the returns were destroyed in a fire.  Catherine passed away in 1892 at the age of 84, and her funeral card was preserved in the family (Figure 6).8 At that time she was “Roberts” again.

As for her widower husband, Frank, by the 1900 census, enumerated a year before his death, he had come full circle and was listed under the name Fran(t)z Ruppert once again (Figure 7).9 At that time he was living with his daughter, Mary, and her husband, Robert Standfield. This final use of the Ruppert surname doesn’t reflect a lasting change, however, as subsequent generations of the family have continued to use Roberts.

One might ask why the Ruppert family felt compelled to change their surname upon immigration to the U.S.? The answer might lie in the political situation at that time.  During the mid 1850s in the U.S., precisely when Franz and Catherine brought their family to America, the American Party, also known as the “Know Nothing movement” was gaining in popularity on the U.S. political scene.  This movement arose as reaction against immigrants, mostly Irish and German Catholics, such as Franz and Catherine Ruppert’s family.  Know Nothings believed that these immigrants would subvert traditional American values and ultimately make the U.S. subservient to the Pope.10

Of course, one could also just ask Aunt Mary Roberts Standfield for her version of the story, recorded in a letter to my great-grandfather (Figure 8).11 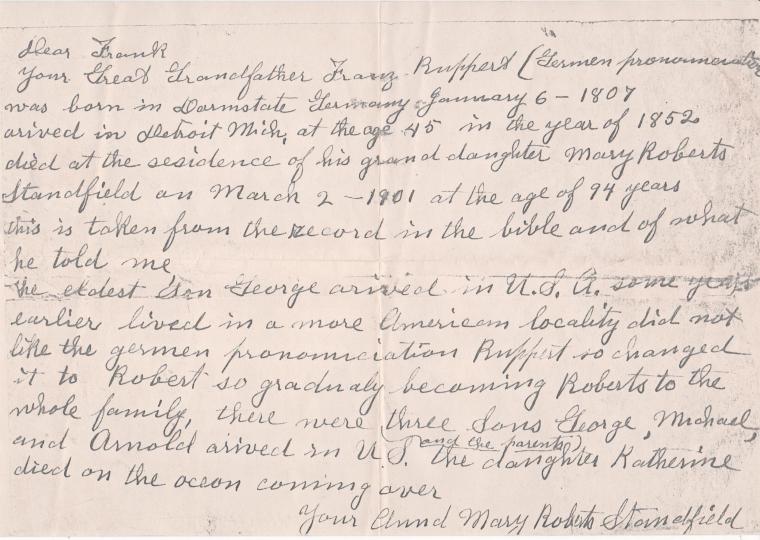 So there you have it. It was the immigrants themselves, or their descendants, who initiated these name changes. Those poor, maligned Ellis Island officials were almost always blameless. Misspellings may have occurred on passenger manifests, but they were nothing more significant than that. So if you have a story in your family about your name being changed at Ellis Island, dig a little deeper and see what you find.